NRG has his Omniverse appearance, although he no longer has the handle on his head. It is currently unknown what his true form looks like. NRG's true form looks similar to how it did in Omniverse, though his outfit has changed. It now covers almost his entire body, and is mostly black. He has a white stripe around his collar and down the front of his torso, sort of a reverse of Ben's original series shirt, which connects to a stripe around his waist. He has white bands around his thighs. He has green patches of clothing on his forearms. He has bands around his wrists and ankles with green patches. 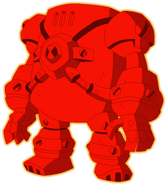 NRG retains all of his weaknesses from the original canon.