NRG is the Omnitrix's DNA sample of a Prypiatosian-B from an unknown planet in the Andromeda Galaxy in Earth-1010.

NRG is a humanoid alien made of pure red radiation. He wears strap-like clothing around his body. The Omnitrix symbol is on his waist.

Normally he is inside his containment suit, which is a dark grey oven-like suit made of very heavy metal. There are bolts all across the containment suit, and it has three slots in the head section allowing him to see. While inside the suit, the Omnitrix symbol is in the chest.

NRG can fire high power radiation beams, even through the vents in his containment suit, that are powerful enough to melt metallic objects.

The energy generated by NRG is hot enough to melt rocks or metals by contact while still inside the containment suit.

When his containment suit is removed (which he can do voluntarily) all of his powers are enhanced greatly. He becomes faster and more agile, as well as gaining the ability to fly. His radiation-based abilities are increased greatly.

The removable containment suit is highly durable, being resistant to most forms of attack, and is immune to any fire-based attacks. It also prevents the wearer's natural radiation emissions from poisoning anyone nearby.

Whenever the Omnitrix transforms into NRG, he is within his containment suit and therefore his powers are weakened.

Due the deadly radiation NRG's true form gives off passively, he must remain inside his containment suit for the safety of others.

The eye holes in the suit are quite small, limiting his field of view.

Due to his nature, NRG (particularly when outside his suit) can be harmed and weakened by Carbon Dampening Rods.

NRG was used by Gwen 10 in Chapter 8 to fend of attacking DNAliens in Bellwood High School before she was recruited by Professor Paradox.

Ben Prime uses NRG briefly during his first fight with Apollo in Chapter 10, however he is defeated with ease.

NRG was used by Ben while he still had the T1 Omnitrix to fight Koraxx, Kraab, and Sixsix. He almost won, before Azmuth remotely shut down the Omnitrix. 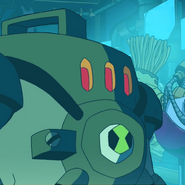 his appearance in Burning Bridges
Community content is available under CC-BY-SA unless otherwise noted.
Advertisement