MouthClaw is an Laxers species live on his home planet Laxerox. He is used by John Tennyson for sucking some other things and use to destroy weapons of any villains. He is the third alien to appear and used by John in the series. He was used 6 times in Season 1 and many more. He will appear in Season 2. He was locked again by Azmuth because it's dangerous to use it. He has an evolved form, Ultimate MouthClaw. 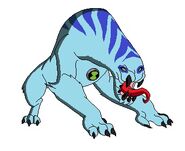 A better version by Ahmad15

Retrieved from "https://ben10fanfiction.fandom.com/wiki/MouthClaw?oldid=865936"
Community content is available under CC-BY-SA unless otherwise noted.