MindMatter is the Omnitrix's DNA sample of a Sentient Chemicoal from the planet Chemicon X in Earth-1010.

MindMatter is a floating mass of predominantly red crystals held together by an invisible force. Of these crystals, two on either side form an arm-like structure with a hand on each end. Two symmetrical pieces of crystal either side of the central 'head' piece are coloured green, with the Omnitrix dial on the 'head' crystal.

MindMatter's main ability, as his name might suggest, is telekinesis. This allows him to lift objects and people, including himself, and move them around as he pleases. This ability is what keeps his multi-crystal body afloat and in formation.

He has a high degree of temperature resistance, enough to allow him to survive on the surface of Pyros where humans cannot.

MindMatter was shown to be vulnerable to sonic blasts, with Haywire's attack overpowering his telekinetic powers and launching him backwards.

MindMatter is used as an Aspect Transformation by Ultimate Ben 10'000 in his Ultimate Ben form in Death of Ben 10, Chapter 13. He is used to protect Eon from Ben 23 as Dino-Mighty and Ultimate Ben 10 as Wildvine.

This alien was one of the ten aliens given to Ben along with the T2 Omnitrix and was first used in From The Ashes. He attempted to use the alien to break into the Castle on the Invictus Flats, predicting it to have a more destructive or interesting power. Instead he learned of the alien's telekinetic abilities and lifted his allies in the Starlit Sky to the roof. MindMatter was used again later to apprehend Ignis.

MindMatter was used again twice in Time Trials. First he was used to pass the second Crucible vault trial, and then again later to defeat Overbite. He was defeated by Haywire. Ben used MindMatter in The Only Good Necroterran to catch Doctor Osiris, but was forced to drop her by Nurse Adria.

He proved completely ineffective against the tomb creature in Dead London, however in Life On Mars Brave New World allowed MindMatter to hold him aloft. MindMatter ripped a fire hydrant out of the ground and smashed it into the monster before switching into Hightide.

In Tides of War, MindMatter was used alongside Powerhouse, Hightide, and Triedge to help rescue and revitalise the T'zun Army political prisoner Marinium.

MindMatter's old artwork, which previously appeared in the main poster for Road Trip 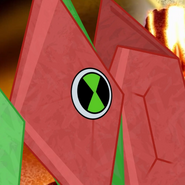 MindMatter in From The Ashes