MindMaster is the Negativitrix's DNA sample of a Sentient Chemicoal from the planet Chemicon X in Earth-1010.

MindMatter is a floating mass of predominantly white crystals held together by an invisible force. Of these crystals, two on either side form an arm-like structure with a hand on each end with the 'arms' being mainly dark purple. Two symmetrical pieces of crystal either side of the central 'head' piece are coloured red, with the Negativitrix dial on the 'head' crystal.

MindMaster possesses telekinetic powers, that allow him to move both himself and other people/objects around spitting in the face of gravity.

MindMaster is one of the eight aliens available in Albedo's Negativitrix as it was created. 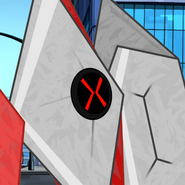 MindMaster in Life on Earth
Community content is available under CC-BY-SA unless otherwise noted.
Advertisement