Mimecraft appears similar to a mime, although his proportions are all wrong. His body and limbs are too thin and long to appear as a regular mime. He wears white gloves and black boots, along with black pants and a white top with black stripes. He has a black beret, and a white, emotionless mask. He wears the Omnitrix symbol on his waist.

Mimecraft is one of Ben's more mysterious aliens, as he does not talk at all, or convey his emotions through his expressions. 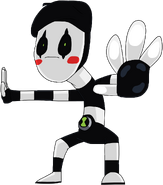