The Mikha'el'baia are a species from the planet Expitium in Earth-83.

The Mikha'el'baia evolved on the planet Expitium at some point in history. They were evidently a relatively early arrival on the evolutionary tree, as the ancient Mikha'el'baia are speculated to have created the planet's extensive cave systems while mining for raw materials.

At some point during their evolutionary period, the Mikha'el'baia formed a symbiotic relationship with the even more ancient Grenatorran.

Modern Mikha'el'baia live in large cities that incorporate natural plant life and formations into their structures, creating an impressive merging of nature and technology.

Despite their intimidating appearance and abilities, the majority of Mikha'el'baia are extremely peaceful, using their explosive powers primarily for blast mining and the like. Their planet's main export is Displotram, an explosive mineral that acts as an efficient power source for various technology. Due to the mineral's explosive nature, the Mikha'el'baia's immunity to explosions make them the only species able to mine it safely.

Most adult Mikha'el'baia have formed a symbiotic relationship with one or more Grenatorrans, who generally live in the forests nearby the Mikha'el'baia cities. Once a link is formed between a Mikha'el'baia and a Grenatorran, it's generally kept for life, with the two lifeforms maintaining a mental link to each other.

Mikha'el'baia are tall, humanoid aliens bearing some resemblance to snakes. They are primarily reptilian in nature, but are warm-blooded and carry some distinctly mammalian traits as well.

Their bodies are primarily black with markings of various shapes and colors. Each Mikha'el'baia's markings are different, acting as their equivalent to fingerprints.

Males and females display some sexual dimorphism, with females being a bit shorter and thinner, having a more tapered head and wider hips. Their timers have an hourglass shape instead of a rectangular one, and they have two bulbs on their hands instead of three.

They have ports on their arms that store either their naturally-generated grenades or a Grennatorran partner. If a Grenatorran is placed into an arm port, it flips a chemical "switch" of sorts that prevents that arm from growing grenades until the Grennatorran is removed.

Once connected to their Mikha'el'baia hosts, Grenatorrans form a biological and neurological link with them, feeding off of the nutrients that would normally go into generating their grenades. Their neurological link allows the Grennatorran and their host to trade information with each other's minds at the speed of thought. It also allows the host to use the Grenatorran's abilities as if they were their own.

The Mikha'el'baia's primary ability is to create bombs from inorganic materials. They do this by charging up their targets with an unknown form of energy, the act of which evidently produces a sound somewhere between microphone feedback and a snake hissing. Once their target is charged, the timer on their chest begins to display a countdown until the object explodes.

While this countdown is active, a Mikha'el'baia becomes invulnerable to any "changes" to their body. This means they cannot be healed, injured, or even frozen in time while this effect is in play.

Mikha'el'baia are also able to produce explosion by punching their target, creating miniature explosions with each blow. This ability seems to be linked to the bulbs on their hands, as it has been observed that Mikha'el'baia missing their bulbs are unable to use this ability.

Mikha'el'baia can generate organic grenades, assuming they don't have a Grenatorran occupying the ports in their arms. These grenades have a relatively hefty blast radius, but take at least five minutes to regenerate after being removed and thrown.

Mikha'el'baia are immune to explosions, being able to survive any amount of force and heat released by one without breaking a sweat.

Mikha'el'baia aren't quite as strong as their appearance would suggest. Their arms have neither the strength or design to throw strong punches, with the majority of the damage done by said punches being created by their explosive abilities.

Bomb 2 Hell, a male Mikha'el'baia accessed by using the StarTrix.

An alternate color scheme for Bomb 2 Hell based off of Mig X. 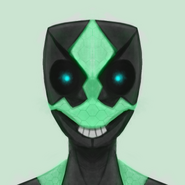 A "Realistic" close-up of Bomb 2 Hell. 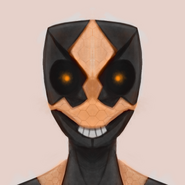 A Mig X recolor of the Realism portrait.

Deimios Miedo, a Puerian/Mikha'el'baian fusion.
Add an image to this gallery

Retrieved from "https://ben10fanfiction.fandom.com/wiki/Mikha%27el%27baia?oldid=821073"
Community content is available under CC-BY-SA unless otherwise noted.