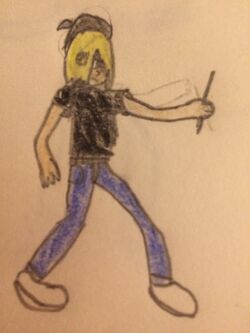 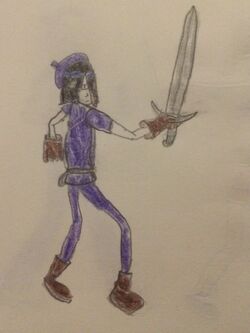 His appearance in the alleged Dark World.

Micheal is a character in Pokémon Sky. He is a Human from the planet Earth.

He is a skinny teenager boy with shoulder length blonde hair over one eye. He wears a black t-shirt, blue jeans, and a beret. He is transgender.

He is a cynical, pessimistic, and shy artist. He is homosexual.

At the ends of Pokémon Light & Dark, Tu adopted a bunch of kids one of whom was Micheal.

Miguel is Micheal's boyfriend. He writes and Micheal draws. He gave Micheal the beret.

Retrieved from "https://ben10fanfiction.fandom.com/wiki/Micheal_(Pok%C3%A9mon_Sky)?oldid=886219"
Community content is available under CC-BY-SA unless otherwise noted.