Look at the picture and see the gallery. It's Too hard to explain

He can shoot big metal bombs and turn in to anything that is made from metal. he can shapeshift his body. He has the ability to Suck Metal in his Arms and create anything from it

his only Weaknesse appears to by wood and controling it. plasma Blasts! 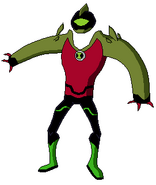 In OV By Fatdoo. Holy Crap!

metalmono monster made by Brandon 10

Made by Upgraderath
Community content is available under CC-BY-SA unless otherwise noted.
Advertisement