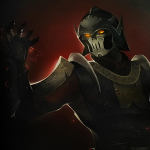 Hello, friends! This is my message wall. Feel free to ask me anything, but please, follow these simple but strict rules: