Merlinisapien is a race from an unknown planet in Milky Way Galaxy. They look like chameleons on earth.

They look like purple lizard with camo-esque spots all over their body with a short tail. They have three triangular eyes with colors of blue, green and red. The top of their head is black, with a spike-shaped fin on the back of their heads. They have four-fingered hands and three toes on his frog-like feet and a wide mouth with sharp teeth, and speaks in a high-pitched German accent.

They can camouflage with his surroundings which usually makes them to appear invisible. In addition, They are also very agile, quick, flexible, and slippery, making them very difficult to catch. Merlinisapiens can scale walls and ceilings with ease. Also, They have a long, retractable black barb that can come out of the tip of their tails.

Despite being able to appear invisible, very observant people can see their shadows. They can still be sensed via mana, however they move too fast to be caught. If they're put into a non-slip surface, they cannot escape. It is unknown wether it is a habit or a weakness that when Prisoner 775, a Merlinisapien, wants to charge at someone, he turns visible again. 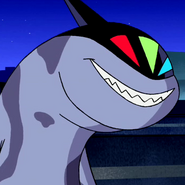