He is vilgax's minion. His body is all made with high corosive acid. He is first seen in the eleventh episode, Escape from the Null Void from the Borg 10- Alien Rescue Squad series. In Frogged out! he steales a device on the Encephalonus IV (Brainstorm's home planet) that increases powers and used it to become stronger.

He appeared in the season finale of the first season. He's a member of The Power 5.

-Shoots acid from hands and mouth

-Can melt any thing with a single Touch

-Shoots acid from any part of its body

-Can melt any thing with a single touch

-Emits a lot of heat 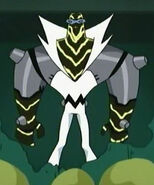 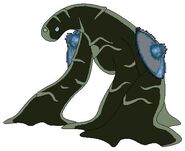 Ultimate MeltDown. Credit to someone on Ben10toys.net for the base.
Add an image to this gallery

Retrieved from "https://ben10fanfiction.fandom.com/wiki/MeltDown?oldid=810772"
Community content is available under CC-BY-SA unless otherwise noted.