Megaton is the Omnitrix's DNA sample of a Prypiatosian-A from the planet Prypiatos, in the Andromeda galaxy, set to appear in Bryce Bowman: Devil's Bounty.

Megaton has a humanoid robotic appearance. He has a silver body with large cylinders on his arms near his wrists, that are full of a blue energy with blue green bubble-like spheres, which constantly move. He has the same energy flowing through the window in his chest, meaning it likely flows through his whole body. His mouth does not move when he talks and his head is a pointed, armored helmet.

Megaton wears the Omnitrix on his stomach.

Silver armor plating clicks into place down Bryce's arm, covering it completely. His arms expand, forming see-through cylinders with blue energy rushing through them. The same armor slaps itself into place over his face, then morphs into a pointed head. His shoulders expand mechanically, then he spins. He holds his arms down at his side, blue energy flowing rapidly through Megaton's whole body and glowing brilliantly.

As his name implies, Megaton can create and manipulate atomic or nuclear energy using his hands, which can do a massive amount of damage to its surroundings. Fundamentally, he is a walking nuclear reactor.

The way Megaton creates his nuclear blasts is by churning the blue energy in his body.

Megaton is able to activate his cylinders on his arms and his chest to melt nearby objects.

Megaton is capable of flight and, as such, he can perform a flying ramming attack.

Megaton is strong enough to take out an Evolved Vaxasaurian with a single punch, and kick an object up nearly past a planet's atmosphere.

Megaton can generate a massive blast of energy. This move can easily knock out enemies, as well as devastate the surrounding area.

Megaton can generate an orb of nuclear energy, which can burn up Ectonurites and greatly harm Vladats. The light generated by the orb is shown to be very bright, as everyone present gets blinded by it. He can also make the attack continue even after he reverts back to Bryce.

Although he has never trained himself to do so, Megaton can produce nuclear energy shields for defense.

Megaton is virtually emotionless, remaining completely objective while in combat. While this may be seen as a positive, it makes him often forget about the people he's defending or saving or even other bystanders.

Megaton can get tired after using up most of his energy.

Megaton's powers can be neutralized by a Prypiatosian-B's abilities colliding. This also effects NRG in the reverse.

Being one of the Omnitrix's most powerful transformations, he can often time the Omnitrix out rapidly. 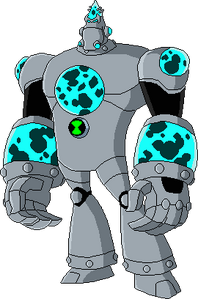 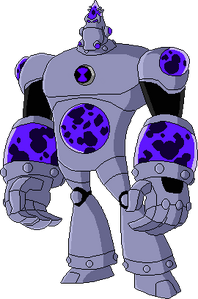