Megabite is a Mordidan from the planet Selva in Simien 10: Polyverse and Simien 10: Blood Monkey. This is a redone version of the original alien Megabite.

Megabite is a large black-grey T-rex like alien. He has a green stripe going from the tip of his tail to the top of his head, going on his back. He stands about 3 meters tall and has yellow eyes.

Megabite can control electricity around his body. He can either fire it as small lightning bolts from his arms, or fire a massive electric beam from his mouth.

Megabite's incredibly powerful jaw can bite through most materials. Additionally, Megabite can digest almost any material he consumes, which can also empower his electric abilities, making them stronger.

While he can't use this ability freely, Megabite's stomach acids are incredibly powerful and can melt through most materials in seconds. If he is sick, for instance, Megabite can vomit his stomach acids as a deadly attack, although this will generally be painful for Megabite.

Megabite's size and body shape makes him naturally incredibly strong. While he can't use his strength in conventional ways like any other humanoid, his body type allows him to perform powerful headbutt charges, tail slams, and earth-shaking tremors by stomping his feet.

Megabite's size and body shape can block him from entering small spaces.

His body shape can be very clumsy. Megabite's tiny arms can prevent him from reaching things or use simple contraptions such as levers or buttons, while his tail can cause damage accidentally if he is careless. He also has a small blind spot between his eyes, which can be used to his opponents advantage.

If he is knocked on his side, it can be very difficult for him to get back up. 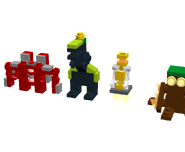 Megabite in Simien's 12 Alien Hex.
Add an image to this gallery
----
Retrieved from "https://ben10fanfiction.fandom.com/wiki/Megabite?oldid=865880"
Community content is available under CC-BY-SA unless otherwise noted.