Magister Maxwell "Max" Tennyson or Grandpa Max as his grandchildren call him, is a hero in Ben 10: Tales of the Omnitrix the paternal grandfather of Ben, Gwen and Ken. He is human from the plant Earth. He first appears in The Rising Hero.

Max is overweight man who has white shirt, covered by a red buttoned-up Hawaiian shirt with a floral design. He has brown striped black shoes.

Max is sweet, selfless and caring grandfather who tries his best to guide his grandchildren.

Though well-meaning, Max is not without a stern side, having struggles to guide Ben during the first few months of his grandson's possession of the Omnitrix. When pushed, Max can be strict, harsh, but not unreasonably so, not being afraid to call people out on their selfishness and mistakes when necessary.

Max has a weird appetite, which comes from his travels both on the Earth and beyond.

Ben 10: Tales of the Omnitrix

In The Rising Hero Max giving Ben and Gwen a ride to Yosement Park he gave them meal worms, but they refused.

Although Max doesn't have any super powers, he is very skilled in combat and can take on anyone who does have them as he is quite athletic for someone of his age. As a retired Plumber, he has access to a variety of various Plumber tools and weaponry, which he uses skillfully. Aside from that, his experience from his Plumber days made him knowledgeable on various species of aliens. He is also able to strategize well and is skilled in inventing new machines. He is telepathically connected to his lover, Verdona.

Before joining the Plumbers, Max was a United States Air Force pilot, with dreams of joining NASA and going to the moon. He was an expert at flying an F-104 Starfighter and was able to shoot down an alien spacecraft.

Despite being highly trained, Max is far from the prime athletic specimen he was during his days as a Plumber. He is a senior citizen, and has not managed to keep in shape, though he does still possess an incredible tactical mind to compensate for his less than stellar physical conditioning. 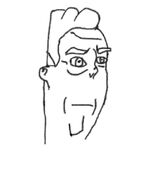 Retrieved from "https://ben10fanfiction.fandom.com/wiki/Max_Tennyson_(Earth-214)?oldid=923088"
Community content is available under CC-BY-SA unless otherwise noted.