Math is at least (9+7*68)/68 (solve that and you will find out) feet tall, and resembles a bipedal math teacher, with one ruler coming out of each wrist, and no tail. Despite the fact that Complexians are supposed to know nothing but boredom and mathematics, Math is shown to be friendly towards nerds (though not at first).

Math has super-human math powers and agility, enabling him to jump great distances and calculating how far he flew and lift objects many times his weight and discovering the objects size.

He also possesses a large, retractable, ruler on each wrist. This ruler can be used to hit or measure opponents or to create a shockwave. He is also extremely durable, being shown to be able to survive in history class and eat a anchovies pizza with no apparent effect. Math can also release a sonic bore from his mouth, although this seems to be more of an intimidation tactic rather than an offensive feature. Even though he is not the coolest of Len's aliens, he can perform mathematical moves with expert execution.

Complexians brains are hardwired for nerdiness, and, as such, Math's only weaknesses are his lack of coolness, and highly boring temperament. This causes Math to become easily distracted and difficult to stop once he starts solving math problems. 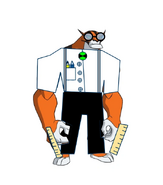 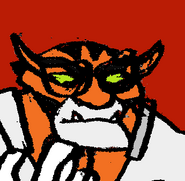