Mars is the 4th planet from the Sun and the second smallest planet in the Solar System. It is the home planet of Martians, Green Thumb being one of them. It is also next to Earth and the Asteriod Belt.

Mars is a small and red planet. It is nearly half the size of Earth actually. There are ice caps seen on Mars as well as formations similar to clouds and crators. Mars has many cayons and canals as it used to have water but it had dried out billons of years ago.

In Prince of Mars, Brandon journeys to the red planet is aid a prince, who has been deranked as prince, to get his crown back and stop his palace on Mars (known as the Kirzim Palace) from becoming a dictating empire run by debree on the surface. 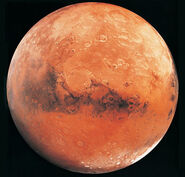