Magnetosphere is a Imonian from the planet Acqua Succhaire in Simien 10: Polyverse. This is a redone version of the original page Magnetosphere.

Magnetosphere is a red alien made mostly out of magnets. His head is red with a metallic mouth and yellow eyes which floats using magnetism in the middle of his torso. He has four extra arms under his main ones which each are tiny half-magnets. Over his torso he has two other "half-magnet" limbs. He has a tail with a magnet at its tip.

Magnetosphere's head can turn 360 degrees to whatever position he wants to look at.

Being magnet like, Magnetosphere can control all metal objects using magnetic telekinesis similar to the one Lodestar and Magneto use. This also allows him to levitate himself due to him being made of metal magnets. He is rather durable due to his skin being made of metal, allowing him to survive lasers and bullets. This magnetic telekinesis can be used by any part in his body.

Magnetosphere has the ability to roll up all his limbs into a ball. While in ball mode, he can roll around and even have a small amount of flight capability by using his magnetic abilities on himself while in a ball. He can magnetise things to him even while in a ball.

Magnetosphere can combine his magnetic abilities from each limb together to create a incedibly powerful magnetic blast, which can knock back or destroy any metal thing in its way.

Being a magnet, Magnetosphere is more vulnerable to electric currents hitting him. Also, any other powerful magnets can have control of him, although his magnetic abilities can block the magnets strength.

Magnetosphere's limbs can be ripped apart with enough force, although he can magnetise them back to him easily. This also happens with his floating head.

Original .jpg appearance of Magnetosphere. The current version has the Polytrix symbol on his chest rather than on his forehead.

A scene from the original series episode Klepto-mania featuring Magnetosphere. 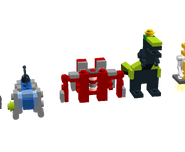 Lego version of Magnetosphere (taken from the original Magnetosphere page)
Add an image to this gallery
Retrieved from "https://ben10fanfiction.fandom.com/wiki/Magnetosphere?oldid=865852"
Community content is available under CC-BY-SA unless otherwise noted.