Start a Wiki
Magnet Man is an alien transformation in Brandon 10.

In Alien Force, Magnet Man takes the appearance of a wide and alien humanoid. His head takes the shape of an oval and has two dark sides as well as one dark side located on his forehead. He also has a wide mouth. His head hovers within his collar, which has one side as blue, one side as red and the middle side as white. He has a color scheme of black and white and grey boots. He also has a sort of band around his wrists; left one as blue and the right as red. The Omnitrix symbol is located on his chest.

In Ultimate Hero, Magnet Man's appearance does not change majorly from his Alien Force appearance. The Ultimatrix symbol is on his chest.

Magnet Man is shown not to have any specific weaknesses but some may come up in the future. 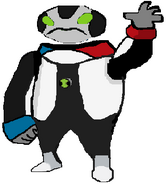 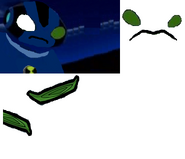 The Making of Magnet Man 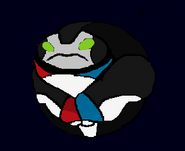 Magnet Man in Sphere Mode
Add an image to this gallery
Retrieved from "https://ben10fanfiction.fandom.com/wiki/Magnet_Man?oldid=865851"
Community content is available under CC-BY-SA unless otherwise noted.