Magnesium is an alien transformation in the series, Brandon 10.

Magnesium takes the appearance of a grey, metallic, humanoid alien. His appearance is quite roundish especially in his stomach area. He has a helmet-like plate on the top of his head base. His shoulders are wide and bulky while the legs are, somewhat, the same. On his legs, there is a curve representing his feet. One of his arms is in the shape of a cannon which is connected to a grey cord attached to his shoulder. The end of the blaster arm has a red circular area surrounded by four spikes. There are black lines at various joints on his body and one stretching across the stomach. There are three eye holes cut into the top helmet. The Ultimatrix Symbol is on his chest/stomach in the middle of the black line.

Brandon spins around in DNA and curls up due to the changes. Brandon's arm goes larger and roundish at the hand area. His skins gets thicker and more metallic. A helmet forms around his face as three tall eye holes are cut into it. Within a flash, Magnesium Appears.

Magnesium has the ability to project highly concentrated energy, which produces flames, from holes that open up on his hands. These flames can be used to produce explosions of multiple types and sizes depending on the concentration level. Due to his armor, Magnesium has enhanced durability and resistance to radiation and other attacks.

Magnesium's major weakness is water which reacts dangerously with Magnesium's armor which can not only cause a lot of damage in the area but Magnesium, himself, will also become affected by the damage in a form of pain. Magnesium's armor, also, slows him down so he isn't a fast alien.

In The Ultimate Pollution, Brandon had unlocked Magnesium and defeated Polutio.

In The Dark Dimension Part 1, Magnesium fights against robots and blasts through a locked door.

In An Extreme Crisis Part 2, Magnesium sets off various explosions within the Extreme Biker Base.

In Day Off, Magnesium is first used to attack the Bounty Hunter's Minions and later used to destroy an Amplifier. 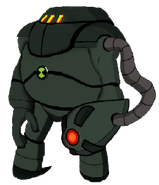 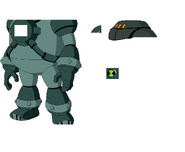 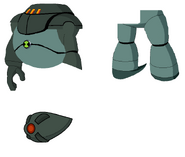 Making of Magnesium 3
Add an image to this gallery
Retrieved from "https://ben10fanfiction.fandom.com/wiki/Magnesium?oldid=904970"
Community content is available under CC-BY-SA unless otherwise noted.