Lynn Loud is Derwin 13’s girlfriend and the Earth-112 equivalent to The Loud House’s Lynn Loud.

She looks the same as her Prime Counterpart, but in an different art style. She has long brown hair tied into a ponytail. She wears a white jersey with red sleeves and a red 1 on her chest. She wears red athletic shorts and black cleats. She is short and athletically toned. She is transgender.

She is strong enough to bench press a barbel made with Hittersplitter quarters.

She is immune to magic.

Lynn is aggressive, brash, competitive, and crude. She can get defensive of others, though.

Sometime before Ben 10: Into the Omniverse, Lynn and Derwin met and got together.

In Ben 10: Into the Omniverse, Lynn is seen kissing Derwin in the credits. 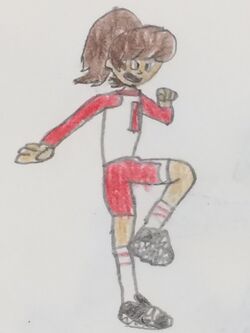