Lucifer is a man in Bryce Bowman: Origins. His species and home planet are currently unknown.

Lucifer is described as an older man with partially balded white hair, who wears a black robe and carries a cane- adorned with a skull on the handle whose eyes are "brilliant red gems".

Lucifer was only in one scene, so it's hard to really tell what he is like. He seemed calm, cunning, and devious. Although, he didn't seem sinister or like he wanted to harm Bryce, but he didn't have Bryce's best interests in mind.

Lucifer first appeared in Revelations: Part Two where he made a deal with Bryce that he would keep Bryce's loved ones healthy so long as he could use Bryce as a bounty hunter of sorts. 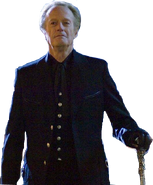