Start a Wiki
Loch Ness is an alien transformation in the series, Brandon 10.

In Alien Force, Loch Ness resembles a humanoid made entirely out of swamp. He has fins at the top of his head and gills upon his neck area. The area inbetween his toes are webbed and possibly his fingers. The Omnitrix symbol is on his chest.

In Ultimate Hero, Loch Ness' appearance does not change majorly from his Alien Force appearance.

Loch Ness has the ability to create water projectiles. When wounded, he can regenerate missing limbs and sometimes create a water-themed weapon as a replacement limb such as a water cannon. It is comfirmed that Loch Ness can swim and breath underwater. In Princess Problems, Loch Ness is revealed to have plant powers as well, being able to control Calocks which are alien vegetables.

Loch Ness' known weaknesses are fire and most materials used to destory or weaken plants including gases. As seen in Tree of Life, Loch Ness can also be affected by electricity as he is mainly made of water. 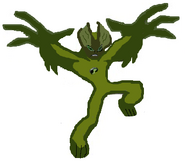 Loch Ness in an Action Pose

Loch Ness in A Hero Returns 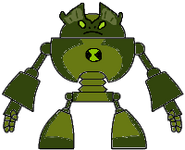 Loch Ness CGI Concept Art in Brandon 10: Aliens Among Us

CGI Concept Art #4
Add an image to this gallery
Retrieved from "https://ben10fanfiction.fandom.com/wiki/Loch_Ness?oldid=865814"
Community content is available under CC-BY-SA unless otherwise noted.