'Tech' is a nickname given to a variety of protagonists from various series and timelines, acting as a legacy title from one character to another. Though the name applies to a variety of characters, they are mostly alternate versions of singular characters, so examples will be listed under which specific Tech they are.

This is the version of Tech that stars in Tech 10: Rebooted. His main struggle is against the Anti-Life Entity and those who have been affected by its madness. 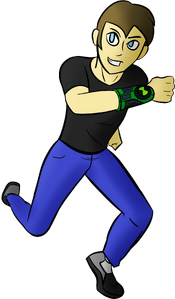 The first Tech introduced in a series, this Tech stars in Tech 10: Ultimatrix Unleashed and Tech 10: Combalien Evolution. His main enemies are Xenon and Vilgax, both of whom want the Ultimatrix, and later Dethrouge, who wants to open the Gate of Reality to fulfill his heart's desire of recreating reality in his image.

This Tech lives in a timeline where technology progressed with steam power instead of electricity. His dress and mannerisms are similar to those practiced in Victorian England. He has a somewhat larger build than most of his counterparts. It is unknown what enemies he has, though he has likely clashed with his timeline's version of The Puppet Master.

Glam Tech lives in a timeline with a flair for crystals and the arts, with all conflict decided in dance battles that take place in crowded stadiums. He has a personality dripping with glamour and style, and has a bit of an inflated ego. His main enemy is the Obsidian Disco gang (an alternate counterpart to the Obsidian Death gang of the Prime timeline), who are trying to bring back Disco by force.

Suit Tech lives in a timeline where Earth is apparently attacked by various mecha fairly regularly. Where the mecha come from and why they're attacking is thus far unknown.

Unlike most Techs, Suit Tech is female, citing her parent's expectation for her to be a boy as an explanation for the first name of 'Isaac'.

Her personality is fairly similar to Tech Prime, though a bit more to the point. Instead of transforming, she uses the B.I.O.M.E. suit to transfer each alien's abilities directly to her human form. 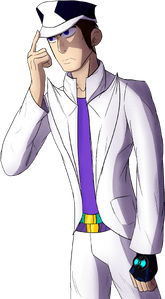 This version of Theo stars in Tech 10: Star Spirit. He and Nova Eldridge assist the Plumbers in cases where nobody else is around to help. While he has conflicts with the Zodiac Organization and a host of other villains, his primary rivalry is with Aeron, an alternate version of him who turned evil after an unknown incident.

Retrieved from "https://ben10fanfiction.fandom.com/wiki/List_of_Techs?oldid=867607"
Community content is available under CC-BY-SA unless otherwise noted.