Most of the Imad 10 villains that have already appeared become stronger and stronger as the serie progresses, even becoming reality warpers. However, the most notable villains , who unfortunately haven't made an official appearance but are not reality warpers are the Sociopath Seven .

1- Xadim : Once a hero, Imad's alternate self became a ruthless dictator after his girlfriend was murdered (He just wanted to prevent this kind of crime from happening again) . He later became a mad villain thirsting for revenge but Imad defeated him. He was later teamed up with him to defeat Varos, and found the path of righteousness thanks to his alternate self. He rebecame a hero and lived a happy life.

7- Daniel out of insanity, rebecame sane and turned into a plumber Hero.

The first Villain to appear in the DA story of Imad 10, Imad's dark alternate self Xadim. He is later reformed. 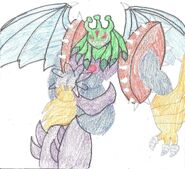 Third villain to appear, Demon from another plane of existence. Chaos the Demon

Ultimate Masquerade escaped and became a villain, with his dark side dominant. Necros

scientist Villains, the Sociopath Seven
Add an image to this gallery
Retrieved from "https://ben10fanfiction.fandom.com/wiki/List_of_Imad_10_Villains?oldid=775805"
Community content is available under CC-BY-SA unless otherwise noted.