Dr. Leonard L. Church otherwise known as "The Director" is a Human from Earth in Bryce Bowman: Origins.

The Director is an older man in his late fifties. He has salt and pepper hair, green eyes, and a grey goatee. He is always seen wearing a grey shirt, whose upper half is black, and matching pants.

The Director is shown to be a calm and calculating man who seeks to achieve his goals no matter what the cost, which often shows his dark and unmoving side. He keeps a consistent tone throughout the series but it has been shown that the Director can easily be infuriated in several instances, such as his reaction to Bowman disobeying orders. However deep down, the Director was a tortured soul, who sought to do his 'duty'.

Being the Director of Project Freelancer, Leonard Church showed inmense skill in leading operations that aided his agents. Such examples include: stealing the Sarcophagus, battling against the Resistance, and other thing.

Throughout the series the Director shows a great degree of knowledge; not only in using A.I. units, but also strategic planning and possibilities. It's often hinted that the Director does many experiments (each varying greatly) to predict the possibilities and outcomes of certain situations. 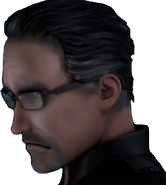