Lenopans, usually referred to as Sludgepuppies or Sludges, are a species of alien blob shapeshifters. Though now at peace with humanity, they have historically tried to cause trouble on Earth and had thus been in opposition with the Plumbers.

Lenopans are capable of taking on humanoid shapes and features, such as skin and hair, or a humanoid shape while retaining a mud-like appearance.

Female Lenopans have two mobile whiskers on their cheeks and two antennae above their much larger eyes, while males lack both. Male Lenopans usually have smaller eyes than females.

Similar to human culture, the taboo against cousins dating extends to cousins unrelated by blood.

Lenopans can stretch, morph and shapeshift their bodies in any way shape or form at will, as well as changing their colour and texture. They can detach their body parts, and stick them back on, reattaching them. If they are disembodied, their pieces will instinctively come together again and reconstitute them.

Lenopans can shapes-shift their body parts, and sometimes themselves into other objects. Using their sludge, they can look like another shape made of purple sludge, while they can still move while in liquid form. Their ability to mimic colour and texture allows them to mimic flesh or fabric exactly. They can also shapes-shift into non-existent or imaginary species complete with unique abilities. They even can morph their body parts into melee weapons.

Their liquid bodies can be gelatinous akin to a large mass of muscle, which allows tangibility and the ability to be mobile. Their bodies can generate slime and shoot masses of it like adhesive projectiles. Their normal slimy form is dense and adhesive enough to trap other creatures in themselves. This form also gives them the capability to go underground infinitely.

Lenopans can survive underwater in any form.

Lenopans can transform with a waterproof layer of slime around them to swim in their natural form or turn into a fish or human to swim.

Lenopans can transform into inanimate objects with enough training.

Lenopans can be killed by water, fire, or scattering their body enough.

In John Smith 10, they can be killed by severe heat, like from a volcano, hardening their body. It is unknown if fire affects them the same way or not. They are also weak to lightning attacks.

Prior to Ben 10: Genesis

In 1989, Oscar and Miguel Amor went to Plenona (an anagram on Lenopan), the homeworld of Lenopan's. Once they arrived there, they were sent into a base, now separated, Oscar was going room to room looking for Lenopans until he knocked one door down, and a Lenopan had a gun pointed to his head. The two were in a stare-off, and Oscar looked into her eyes and realized she wasn't going to shoot. Once they talked, Oscar realized she wasn't like the other Lenopan's. Oscar was able to convince Miguel to help smuggle her off her world and bring her to Earth. While on Earth, they fell in love, got married, and had two kids, Corben and Antonio Amor.

One night on patrol, Ben tries to stop a person robbing a gas station. He finds out he isn't an average human but a Lenopan, calling himself Sludge Titan. They fight, and Antonio jumps into the fight but is thrown through a window. After Ben defeats Sludge Titan, he checks on Antonio to find out he is bleeding purple sludge. They decide that they need to tell their parents what they do to get answers about Antonio. Oscar and Angela finally tell their kids the truth and tell Antonio that while he is more human, he possesses all the abilities of a Lenopan and their weaknesses. 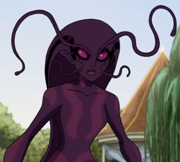