Lavazoid is a magma-based being, covered in cooled, rocky armor and stands twenty feet tall.

He has three open ports in his chest where small flames rise into the air.

Lavazoid's armor is cracked, revealing the magma underneath.

He also has small falls of lava on his stomach and his shins.

Lavazoid is surrounded by flames that constantly swirl around his body.

The Omnitrix can be found on the back side of his left hand.

Lava gushes out of the Omnitrix's faceplate and floods over Bryce's whole arm, then head, then down his back. The lava cools, quickly, then cracks and shatters as he tries to move. His eyes split open through the armor and send swirling flames crawling over his body. Lavazoid stands tall with his arms raises over his head and groans

Lavazoid can project high-velocity magma from his hands and mouth. He can manipulate his lava's temperature, even cooling it quickly to trap enemies in solid rock.

Lavazoid is capable of moving rock and earth near him. He will often raise pillars of rock to attack enemies at a great distance or create barriers to shield teammates or civilians from oncoming attacks.

Lavazoid's size grants him a good deal of strength. He could hold his own against Vilgax, but would eventually lose.

Lavazoid can reshape his rock armor to create spikes and crags. He can also create lava spikes.

Lavazoid is quite slow moving, making his main source of attack his ranged options. However, lava can only travel so far, even as quickly as he and project it, so he has to rely on his terrakinesis to reach enemies at a great distance. 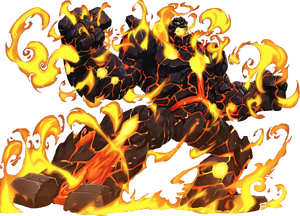 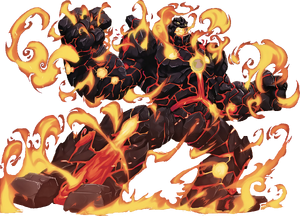