In her human state, Lauren has slick black hair that is shoulder length. Her eyes are brown. Lauren's body figure is slender. Lauren always carries a knife in her boot in case of emergency.

When she is in her Energy Revolt form, Lauren's skin turns pink. Her eyes become purple with her costume on. Her hair turns white with a magenta aura. Her costume is a navy blue spandex with a utility belt that has sword holders so she can transfer her mana to make mana swords. There are flashbangs, smoke bombs and many more. She wears black leather boots with no heels on them. She has on armored shoulder and knee pads which evolves her durability powers.

Lauren is confident in herself but is reliant of her powers. She gets what she wants without question or else she whips out some mana power. Lauren has shown to be kind and gentle to others, especially as her alter ego Energy Revolt. When both of her mother died, Lauren showed affection and mournfulness. Often noble, she always puts others in front of herself. Energy Revolt has proven time and time again her loyalty to justice and no interest in joining the evil side of the Universe.

This is after she lost her memory and joined MI6

She is alone, all alone. 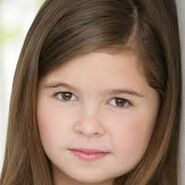 Retrieved from "https://ben10fanfiction.fandom.com/wiki/Lauren_Genare?oldid=756243"
Community content is available under CC-BY-SA unless otherwise noted.