This is Roads' alien first introduced in BTMT. You may have misspelled LMN8 from Evan Billion in the URL.

LMN is a Limonian from the planet Citria. He was created by Roads and first appeared in Ben 10: Multi Trixes.

He is a yellow stick figure with a lemon-shaped head and a lemony texture.

His only powers are flexibility and shooting sour acid from his hands.

He is not very strong or durable, and is very light. He can easily be picked up and bent.

He was first unlocked by Ben in When Life Gives You LMNs..., and has appeared several times since.

LMN is set to appear in Ben 10: Revamped with an all-new appearance.

LMN is and is set to make his first appearance in Ben 10: Ultimate Alien MEGATRIX the Video Game.

He appears in this series.

He also appears in this series. 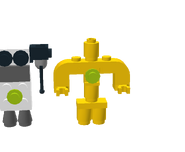 LMN 2.0
Add an image to this gallery
Retrieved from "https://ben10fanfiction.fandom.com/wiki/LMN?oldid=865811"
Community content is available under CC-BY-SA unless otherwise noted.