Kumainto have the appearance of large, humanoid beetles. They have horns on their heads. Their bodies are covered in a black exoskeleton. Their bottom jaw is extremely large. Some have spikes on their bodies.

Once they reach adulthood, Kumainto undergo an extreme metamorphosis. This makes their heads and mouths much smaller, their bodies bulkier, an extra set of eyes, an alternate horn design, extra arms, pincers instead of fingers, and holes between the pincers. They also have wings beneath their shells now.

A young Kumainto prior to its metamorphosis into adulthood.
Add an image to this gallery 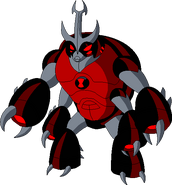 Retrieved from "https://ben10fanfiction.fandom.com/wiki/Kumainto?oldid=847823"
Community content is available under CC-BY-SA unless otherwise noted.