AML F7-001, more commonly known as "Kristen", is the protagonist of the KrisTen series.

Kristen was designed to hold the appearance of a 15 year old girl, although her body language tends to make people mistake her for being younger. She has long pink hair that goes two thirds of the way down her back (the color was a fluke). Her eyes are very odd; the irises are colored in a pattern that resembles the Intergalactic Peace Symbol. She was designed this way so she would be recognized as a superhero to humans.

Kristen is an artificial mana-based lifeform created by Coxira and Lenaya, designed specifically to replace both Ben and Gwen Tennyson so that Gwen could go to Anodyne without compromising Earth's safety. Had her brain completely wiped during transfer to Earth, so she has no idea how to use any of her powers.

Her powers are, in essence, a combination of both the Omnitrix and an Anodite. She is able to transform into any of 10 different alien species using XITA, as well as manipulate mana. Unfortunately she has forgotten how to tap into either of these powers, leaving her rather defenseless most of the time. Her transformations can be activated at will, although she does not know how to do this. Usually her transformations are triggered by periods of high emotional stress, such as extreme fear, anger, sadness, or excitement. The most reliable source of these heightened emotional periods seems to be seeing her friends, especially Lyn, in danger.

These are the aliens that Kristen is able to transform into.

Kristen is a bit of an enigma. Having little to no knowledge of the world, she spends most of her days wallowing in confusion, and acts much like a young child only a much more mature. Because she is so used to being either confused, frightened, or in an adrenaline-fueled fight-or-flight mode, she tends to be surprised by other emotions (such as remembrance, boredom, and love), which confuse and scare her even more. Despite being frightened so often, she is by no means a paranoid person, and the fact that she has no knowledge doesn't mean that she's stupid. In fact, she is extraordinarily curious person, and picks up new information and skills abnormally quickly. 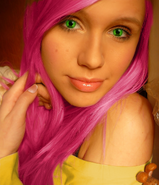 Live-Action Kristen
Add an image to this gallery

Retrieved from "https://ben10fanfiction.fandom.com/wiki/Kristen_(Character)?oldid=564013"
Community content is available under CC-BY-SA unless otherwise noted.