Kraab has goldish brown-colored armor, a sideways mouth, four scythe-like legs and a large, powerful pincer for a left hand. Within the pincer is a power blaster combined with a chemical sprayer. He can use his legs to burrow under the ground. When he goes underground he pulls his head down, making his neck disappear. He resembles a fiddler crab. He has orange lines running on his body and his eyes has the same color as they highlights of his pincer.

Kraab was a veteran of the Pyros-Pisciss war, during which he suffered severe injuries, resulting in him having mechanical parts implanted in his damaged body. 95% of his body is now mechanical and 5% is Pisciss Premann.

Nothing else is known about him.

His goal, as a bounty hunter, is fortune as a first and fame for second.

It should also be noted that Kraab talks like an actual hunter, calling Ben his "prey", and saying that he is "hardly worth the hunt".

Kraab has a chemical spray that takes away Big Chill's and Ghostfreak's power to become intangible and invisible, giving him the opportunity to land a blow on them. He has a degree of enhanced strength from his mechanical body. It is suspected that he has higher intelligence than humans, but it's hard to tell. 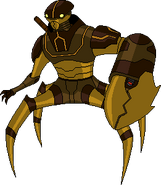