Koumori is a character in Pokémon Sky. She first appeared in All That Glitters, Is Bright Lights of the Derwin 13 Shorts. She is an Off-the-grounder Kirlia from the Off-the-ground.

She has purple hair in a bob cut with bangs over her eyes. She wears a black, blue and teal patchwork dress with two straps on the back. She also wears purple leggings.

In the episode Pride Month, the blue and teal parts of the dress are purple.

In later installments in the series, her hair is longer. She has not bothered re-dying her hair, so her natural black hair shows through.

She really likes creepy things. She is quite stubborn and sarcastic regarding her blindness, but otherwise happy and excitable. She is asexual and homoromantic.

She has psychokinesis and pyrokinesis.

She is blind, so she relies on her Psychic Vision to see. It allows her to see 360° around her. It only works when her horns are pointed straight.

She has mastered the family technique of Shadow Teleportation.

She can use her dress straps as tendrils.

She is blind, aside from the Psychic Vision. If her horns are pulled down, she will be truly blind. She can also not read, see color or anything 2-D.

Her Shadow Teleportation forces negative emotions on her. Her horns droop when sad, so her vision in this form is low.

Koumori enjoys scaring Derwin, but Derwin is getting less cowardly. They also bond over their disabilities. 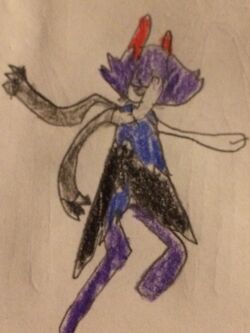