Killermari is the T2 Omnitrix's DNA sample of a Chimera Sui Generis (also referred to as a Chimeran) from the planet Vilgaxia in Earth-1010.

Killermari takes the appearance of an above-average Chimeran, with large muscles and a tall stature. He is a green humanoid whose thick arms are covered in visible red veins. His has three fingers and a thumb per hand, and three toes per foot with one being a hind toe.

He has four long green prehensile tentacles attached to his chin. There is a green sack of liquid either side of his mouth, running from his cheeks around the back of his head. His eyes are green and his head has many brown spots.

He wears a white jumpsuit covering his torso, legs, and feet. It has a green < shaped stripe across the chest, leading into a belt-like pattern around the waist. The Omnitrix symbol is on right pectoral.

Killermari retains all of the abilities of his species, including their high degree of strength and durability, their sharp teeth and claws, and their ability to project powerful red beams from their eyes. Ben is very aware of this power set, but has yet to use any of them.

Killermari seems to have boundless overconfidence in his own strength, and will take any opportunity to demonstrate this. Ben has yet to learn of this weakness, however.

Ben tries to avoid using this alien, as he finds it distasteful to share the same species as his former arch-enemy Vilgax.

Ben first theorised about his Chimeran form all the way back when he first unlocked Blitzwolfer- realising that aliens could be unlocked by having them attack his Omnitrix. At some point prior to actually unlocking the form, he decided upon the name 'Killermari'.

Killermari was first unlocked when Ben scanned a passing government worker in the capitol building of the city Ben finds himself in, in order to get to the presidential debate without being caught. He was later used again to silence the audience of the debate so that he could say his piece. According to Artraxx, however, this move was considered highly offensive so therefore likely worsened Ben's position in the court of public opinion that he was trying to sway. He briefly re-appeared in Time Trials to attack and interrupt Haywire.

Killermari was used in the Aquillis Colosseum to fight the Pisciss Volann gladiator. He won and fled the arena, and also attacked Koraxx on the way out. 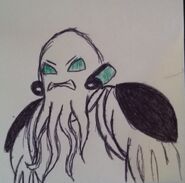 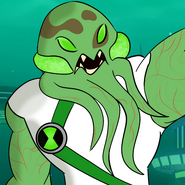