"You tried, everybody tried, but here I am a monster. And if I look the part, why shouldn't I act it?"

Kevin Levin is an 19 year old gang leader in New York City. He hates Ben Tennyson for imprisoning him in the Null Void. His powers allow him to make a suit of armor out of whatever he touches.

Kevin wears a black t-shirt with blue suspenders and black wristbands. He has blue jeans and brown shoes. His hair is black and shoulder length, brown eyes, and caucasian skin with an "X" scar on his chin given to him in a fight with Ben.

Kevin is kicked out of his house by his mom and step-dad.

He met a 10 year old Ben and Gwen at the Total Zone Arcade. They hung out and eventually went back to his place. Ben revealed that he had alien super powers by turning into Heatblast. Gwen went back to the RV to tell Grandpa that Kevin and Heatblast went to stop a train robbery. When they got there Kevin said they were going to make the trains drive into each other and steal all the money. Heatblast says that they can't do that because innocent people would die. Kevin said he thought Ben was joking about being a hero, thinking nobody would use their superior powers for good and get nothing in return. Kevin ended up absorbing the Pyronite DNA and gaining Heatblast powers. They fought and Ben timed out after stopping the trains from colliding. With his new fiery powers, Kevin goes to scare a few teens that picked on him. Ben, as Four Arms, gets there to stop him in time. Kevin's Pyronite powers fade away and he absorbs Tetramand DNA to get Four Arms powers. They fight and Four Arms wins. Kevin's Tetramand powers fade away and Ben offers to help Kevin by providing him with food and a motor-home to sleep in. After a moment Kevin agrees. Ben, Gwen, Max, and Kevin are now living in the Rust Bucket.

Later that same summer Vilgax returns to take the Omnitrix from Ben. At this time Kevin and Ben were messing with the Omnitrix and accidentally access Master Control. Ben is constantly in alien form and fights Vilgax alone because he thinks he's unstoppable. Max opens a portal to the Null Void to send Vilgax there. Vilgax grabbed Ben and Kevin before going in the portal. Vilgax removes the Omnitrix from Ben. A surge of energy hits Kevin which mutates him into all of the accessed aliens. Kevin's mind is clouded with rage and fights Vilgax in the Null Void. During the confusion Ben escapes with the Omnitrix. With the portal only being able to be open for a few more seconds Ben leaves Kevin in the Null Void. Ben concedes this his greatest failure.

Kevin is put into the Null Voids Incarcecon and meets Kwarrel. Kwarrel tells Kevin if he needs help come to him.

Kevin accepts Kwarrel's help and returns to his Human form. They escape Incarcecon, but Kwarrel was killed in the process.

Kevin and Looma get engaged in exchange for car parts.

Kevin returns to Earth with Argit and they start up a garage.

Kevin's Gang sets up a weapons deal with the Forever Knights and the DNAliens. Their trade gets interrupted by Magister Prior Gilhil, Ben, and Gwen. His gang slips away from the battle but Kevin stays for his revenge and fights Swampfire. Kevin loses and then wakes up in cuffs that dampen his powers. He tells them where he thinks the Forever Knights are because he wants his money back. The Magister frees him and he escapes but they got their information.

P'andor runs into Kevin and his gang and tells him to open up his suit for a reward. Kevin agrees but then regrets it as P'andor goes rouge and doesn't pay him. The Tennyson's see P'andor causing destruction and team up with Kevin and his gang to stop P'andor from radiating the city.

Ben tells Kevin about an Osmosian named Aggregor. Kevin is concerned because he knows how powerful Osmosians are and says if he needs his help taking down Aggregor he will help out.

Argit finds Andreas and uses him to terrorize the Forever Knights for money.

Kevin finds out what Argit is doing and tells the Tennyson's because he knows they're looking for a Talpaedan named Andreas.

Kevin and the Tennyson's save Andreas from being executed by the Forever Knights.

The Forever Knights set a bomb to destroy everything within a five miles radius of a populated area. Andreas sacrifices himself. Kevin says he's done working with Argit because he betrayed Andreas and Kevin doesn't trust him anymore.

Ra'ad finds out the way Aggregor has been tracking down the other Andromeda aliens is by using the GPS of the Omnitrix. Ra'ad finds Ben to deactivate the Omnitrix. He and Ben fight, Ra'ad loses. Ben's team, along with Kevin put Ra'ad in a containment pod in Los Soledad and interrogate him. He tells them about Aggergor's tracking system. Ben trusts him and let's him out but Ra'ad betrays them. The Omnitrix tries to collect his DNA but Ra'ad doesn't let it by fusing with it. The team doesn't know where Ra'ad is and then Aggregor breaks into the building to capture him. He starts attacking and Ben only has one transformation the Omnitrix is allowing him to turn into, an Amperi. Ben turns into AmpFibian and fights Aggregor. They're losing so Gwen teleports them to Kevin's hideout. Ben finds out Ra'ad has fused with him. Kevin brings out a machine to get them separated and it works but now Aggregor knows where they are. They all fight to protect Ra'ad but he leaves. Kevin calls him a coward saying that Ben is risking his life for Ra'ad and he's just running away. Ra'ad decides to help Ben and gets captured by Aggregor. When leaving Aggregor blows up Kevin's hideout.

Ben's Team, along with Kevin's Gang, find out that Aggregor is in Los Soledad. They know that he will become godlike if they don't stop his plan.

Looma returns to marry Kevin. Kevin goes to Ben for help because if Kevin doesn't marry her Gar Red Wing will destroy Earth. Ben fights for Kevin. He uses many aliens before winning as Four Arms. In return Looma is to be married to Ben in three years. Kevin knew this and secretly feels a bit sorry for Ben. 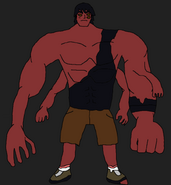 Retrieved from "https://ben10fanfiction.fandom.com/wiki/Kevin_Levin_(Universe-7781)?oldid=916566"
Community content is available under CC-BY-SA unless otherwise noted.