Start a Wiki
Kevin Ethan Levin is a Human/Osmosian hybrid in the series Bryce Bowman: Origins. When Kevin first appeared in Kevin 11, he quickly became one of Bryce's most notable nemesis.

Kevin is a tall and muscular young man. His normal attire is a tight black T-shirt over a grey long sleeve shirt, blue pants, and black combat shoes. His hair is styled into a choppy mullet. Occasionally, he is seen wearing a short sleeved, light blue, oil stained, mechanic's jacket over a white muscular shirt, blue pants, and his black combat shoes.

Kevin is restored to his human form, but now wears a gray, long-sleeved shirt under a black mechanic's shirt, blue jeans and black combat boots.

After absorbing energy, Kevin can channel energy through his hands to manipulate technology, discharge it as an energy blast or use it to speed up cellular regeneration to increase his strength or recover from injuries at an accelerated rate. However, the energy will dissipate over time or through excessive use, so he is required to recharge.

However, if Kevin absorbs energy, the energy will cause Kevin to become mentally unstable. Storing energy for long periods of time will worsen his instability. This mainly occurs in Osmosians who absorb energy very often but cannot control it due to inexperience and lack of skill. Energy absorption can sometimes easily turn into an addiction.

When Kevin has recently absorbed energy, he develops black marks around his eyes. This is a side effect of absorbing energy.

Similar to his ability to absorb energy, by absorbing the DNA, metabolism, and life force of other life forms, Kevin can use it as nourishment to sustain his health and strength. Absorbing all of someone's energy will kill them. Kevin can use the energy to acquire the creature's powers and undergoes mutation to accommodate the absorbed abilities.

Despite complete access to any of these absorbed abilities at anytime, they aren't as strong as their pure forms.

Matter Absorption Kevin can absorb the properties of solid materials, transmuting himself into a living form of whatever material he has absorbed and subsequently use it to proportionately increase his physical strength and durability.

Kevin is able to absorb multiple materials at once. He can also, temporarily, give someone else the coating.

He is able to use high levels of strength and durability as well as regenerative and shape-shifting abilities, seen when he shifts his limbs into a variety of different tools and weapons and also restoring his severed hand.

Kevin is able to repair objects of the current material he has absorbed either by turning it into a liquid form or releasing a liquid version of whatever material he has absorbed. He can partially merge with the actual matter and manipulate the substance's form. Kevin can easily pick locks, using his powers to absorb the material of the lock, then form his finger into a key. Kevin can also absorb liquids, and when he does he gains the properties of that liquid (according to Dwayne, if Kevin absorbs mud, objects will pass through him without causing physical damage). If a part of his body is severed while he has absorbed some matter he can replace his hand.

Kevin can create solid matter constructs from matter he has absorbed.

Other Skills and Abilities

Even without his absorption powers, as an Osmosian, Kevin is shown and proved to be stronger than an average human. While not to the same extent as aliens like Methanosians, Kevin is capable of lifting/throwing the combined weight of several people with little strain. He is also capable of resisting impacts and blunt force trauma that would severely injure an ordinary person with moderate discomfort.

Kevin has some noticeable skill in martial arts which he gained during his years as a runaway, a prisoner in Incarcecon, and an alien tech dealer. With this combat skills, he has proven on several occasions to be a highly formidable fighter.

Kevin has good motor skills, being able to race and chase in his car and the Rust Bucket 3. He is also great at mechanics and engineering. He is shown to repair his car for the numerous damage it took during the course of the series. He also modified his car, setting alien tech for beneficial gears. Kevin is also shown to be very good with animals, even without trying.

After Change of Plans, Kevin is no longer a villain and has joined Bryce's team. This list will be for episodes that he fails to appear in.

Kevin's appearances will from now on be recorded again, because he is no longer with Bryce

Kevin as he appears in Kevin 11 (BBO) 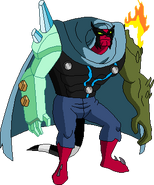 Kevin, restored, in and beyond Change of Plans
Add an image to this gallery

Retrieved from "https://ben10fanfiction.fandom.com/wiki/Kevin_Levin_(Earth-90)?oldid=872936"
Community content is available under CC-BY-SA unless otherwise noted.