Kersmack is the Omnitrix's DNA sample of an Incursean from the planet Incursea set to appear in Bryce Bowman: Devil's Bounty.

Kersmack is a humanoid frog-like alien with three-fingered hands and two-toed feet. He is, however, considerably taller and more muscular and paler-skinned than a typical Incursean and has a more defined jawline.

He wears a dark grey jumpsuit with black on his sides and back, which extends up into his hood and down his arms, under his shoulders. He also wears black sunglasses.

Kersmack's Omnitrix badge is on his right forearm

Slimy, green skin slides over Bryce's arm and merges his fingers together into two. He arches his back, as his arms and legs elongate and a grey and black jumpsuit appears over his body. He jumps up, twirls in air and lands on his feet. Kersmack poses with his arms in a karate stance and tongue out.

Kersmack has powerful jumping abilities and is very agile.

Kersmack's physique makes him stronger and more durable than an average Incursean.

Kersmack possesses a long, sticky and prehensile tongue, which he can use as a grappling line or to hit a distant target. It is also very strong. Its tensile strength is incredible as well.

Kersmack can inflate his chest to repel enemies and gain momentum to jump.

Kersmack's tongue will hurt if it stretches too long.

Like all Incurseans, Kersmack is weak to a strong smell, such as that of a Methanosian's swampy stench. 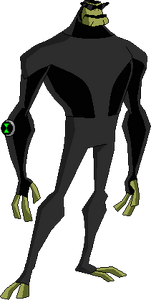 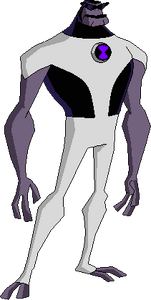