Ken "Kenny" Tennyson, also known as Spanner, is the son of Ben Tennyson and Kai Green. On his tenth birthday, he received a duplicate Omnitrix from his father. He made his first appearance in Ken 10.

Kenny bears a striking resemblance to his father when he was his age. His clothes are modeled after his father's. These include a white T-shirt with black accents and borders at the sleeves, and his trademark baggy green cargo pants. Kenny's eye color is even the same as Ben's. But his skin tone is slightly tanned which he inherited from Kai.

In The New Omniverse, he is a bit older and the black and white (now green) on his shirt is now switched. The cuffs near his leg as well as his belt are now green and he has black pockets instead of white. The circle around his belt buckle is now white. His eyes are a darker color.

AsHe wears the Omnitrix 2 on his left wrist.

Kenny is very much like his father was when he was 10 years old. One example of this was his immediate friendship with fellow troublemaker Devlin Levin.

Ken was also shown to be slightly more resourceful than his father, as he used Grey Matter to hack his Omnitrix and unlock the Master Control.

Ken wears an Omnitrix MK 2 made by his father on his left wrist to replace the Omnitrix Replica. His list of aliens are:

Ken possesses a technologically advanced, full-body suit (provided by Professor Paradox) that is armed with wrist-mounted blasters and jet-boots, which allow him to fly. He also possesses a device that allows him to travel through time.

Ken also possesses a Dehydrated Techadon Army Cube which he can use to create Techadon Robots that would carry out orders for him. 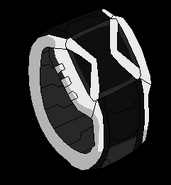 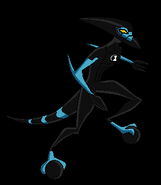 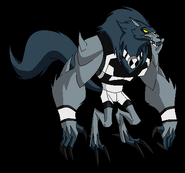 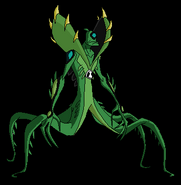