Ben 10 Fan Fiction Wiki
Register
Don't have an account?
Sign In
Advertisement
in: Characters, Heroes, Future Self Characters,
and 10 more

Kai Carson (A.K.A Kai 200) is the Future Counterpart of Kai in the series Kai 20: Aliens In Danger.

He resembles a younger version of Ben 10K durring Omniverse.He now has a blue shirt with a light blue-ish strip in the middle,and wears jeans.

He wears the Alfatrix on his left wrist.

With the use of the Alfatrix he can fuse Alien DNA to create new beings. 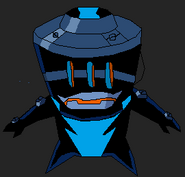 Durring the episode Where The Dimensions Fight Part 1 and so on. (First seen on a preview for the episode.)