Justicebug is the Omnitrix's DNA sample of an Equitem from the planet Equitice, in the Milky Way Galaxy, in Ben 10: Heroes Endeavour.

(Alien credit to Neptune#2977 on Discord)

Justicebug is a muscular, humanoid insect with a black suit covering his body. The black suit is fitted with green armored pieces. The armor pieces on his torso designed to resemble pectoral and abdominal muscles, with a metal, pentagonal shape in the middle. There are also green shoulder plates. His Omnitrix symbol is located on the metal pentagonal shape in his middle torso.

Justicebug wears a green belt with a white strip, similar to Omniverse Shocksquatch. The only difference is a red, oval shaped buckle with a silver circle in the middle of it. Justicebug also has silver kneepads with red attachment strips. He also wears a red scarf that can be used for gliding. He also has silver glove-like and boot-like coverings on his hands and feet, with 3 metal claws on each hand, and 2 claws on each foot.

Justicebug's helmet covers his entire head and is is green with a silver mouthpiece. It has a horn that goes up the middle of his head and ends with a claw shape at the top. He also has red eyelids, small, silver horns on the sides of his head, and 4 black shaped hook-like things attached to his lower helmet.

The black part of the suit gets shot out of the Omnitrix from Ben's arm, and the Omnitrix fades into Justicebug's gauntlet as it comes out of the hand. The green torso armor pops out of the black suit, followed by the silver pentagonal shape, then the belt wraps around his waist. We then see the ends of the scarf fly out, and then we see the Horn grow out of his head. Finally, we see Justicebug's full body.

Justicebug is driven by the force of justice and righteousness, which gives a minor personality shift in Ben. Justicebug can channel his inner energy into his movements allowing him to unleash actions such as the super jump and the justice kick. When high enough, he can use his scarf to glide downward.

If he concentrates enough, Justicebug can heal himself in short bursts and even switch to defense mode. Defense mode boosts his mediocre durability enhancement at the sacrifice of some of his attack power. While in defense form, the green parts of Justicebug's armor become yellow, and the red parts become cyan.

Justicebug, with his bodily energy channeling, has strong attack power and lightning fast reflexes, able to dodge flurries of attacks.

Justicebug can become tired easily if he channels his energy lots, and when he's not channeling a specific part of energy he's a rather mediocre fighter.

Justicebug also as relatively weak defense, needing his armor to actually stand a chance, and his attack power becomes awful while in defense mode, meaning a mode switch must be timed perfectly.

Justicebug's centre horn can easily be grabbed and used to swing and throw him with ease.

Equitem are a race of bug justice warriors who travel the galaxy protecting not only their planet but those part of who are under the intergalactic law. The Equitem are mostly hand-to-hand combat aliens fighting up closing and channeling energy through their fists for harder hitting attacks. The most devistating attack known in the galaxy used by the Equitem is the "Justice Kick"

Justicebug was originally designed for the Roblox game Ben 10: Universal Resemble by Neptune#2977 on Discord. BigChill10 asked for permission and was given it by the creator. The art is done by BigChill10 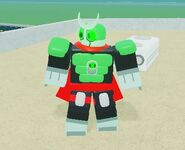 Justicebug as seen in Ben 10: Universal Resembled on Roblox
Add an image to this gallery
Retrieved from "https://ben10fanfiction.fandom.com/wiki/Justicebug?oldid=919980"
Community content is available under CC-BY-SA unless otherwise noted.