Jury Arms is a fusion between Four Arms and Jury Rigg and forms part of the Biomnitrix Unleashed project. Made originally by Supersketch1220 from Deviantart and remake by Rizegreymon22

Looks like Jury Rigg but his skin is red as Four Arms and has four arms, has four eyes and a big lower chin with the teeth poiting up, has Four Arms' moustache, beard and spikes on the head and arms, wears Jury Rigg suit but sleeveless on the arms and each hand wears Four Arms's gloves. Has the Biomnitrix symbol on his stomach like Jury Rigg. 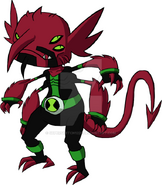 Original Jury Arms made by Supersketch1220
Add an image to this gallery
Retrieved from "https://ben10fanfiction.fandom.com/wiki/Jury_Arms?oldid=865743"
Community content is available under CC-BY-SA unless otherwise noted.