Jumpstart has a black and blue color scheme. He has one blue eye in the middle of his head. He has two antennae and a tail that feature plugs on their tips that allows him to draw energy to himself. He has four fingers on each hand with similar plugs on the tip of each finger. He has only two front toes.

He is also muscular and has gold battery bolts on his shoulders, arms and hips. The plug tips on his fingers are square. The Atomnitrix symbol is placed on his chest.

Jumpstart has the ability to absorb and redirect any kind of energy, including mana even from a little distance by using his antennae, tail and fingers.

Jumpstart needs to absorb energy from time to time to fight, thus the energy contained within him will deplete with use. 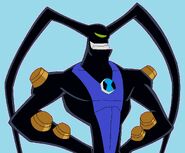 Jumpstart's Old Image
Add an image to this gallery

Retrieved from "https://ben10fanfiction.fandom.com/wiki/Jumpstart?oldid=894903"
Community content is available under CC-BY-SA unless otherwise noted.