Jetray is a red, humanoid, manta ray like alien with two black lightning bolt-like stripes coming down from his shoulders to his Omnitrix symbol. He has been shown to be slightly taller than Julie in Pier Pressure. He is about Ben's regular height, excluding his horns.He also wears a green jumpsuit and has extra gills on his neck.

Jetray has yellow horns extending from his nose, gills underneath his arms and yellow patagia which he uses to fly and glide through water.

Jetray can fly at supersonic speeds. Jetray maneuvers through the air with little to no flapping and accelerates to speeds greater than light with ease. Jetray is even capable of maneuvering through space, a task which no amount of flapping would allow. Jetray's flight speed even allows him to go into hyperspace, which means he can travel across interstellar distances in moments.

It would appear that Jetray has an additional key to flight beyond his wings. In proportion to his size, he has a very short wingspan, although his weight is unknown.

Jetray can shoot neuroshock blasts from his eyes and his tail.

Jetray is durable enough to withstand gunfire from a fighter jet, though it does cause him great discomfort.

Jetray has some degree of enhanced strength, as seen in The Enemy of My Enemy, when he demonstrated it by pushing Ultimate Kevin.

Jetray can survive underwater as seen in the Ben 10: Alien Force video game.

Jetray can survive in the vacuum of space. 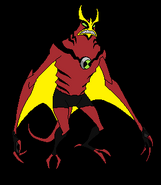 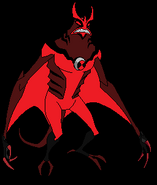