He has his AF appearance.

His design is based off of the joke Derrick made. He has a black jumpsuit with two shoulder pads and a green stripe down the center of his jumpsuit. The Omnitrix is on his left shoulder. His face also looks less melted and his two horns are larger. He has large spikes coming out of his arms with little webs coming out of them. His feet and hands have little webs too. His legs are bent at the knee and straightened at the thigh. In between the thigh and knee, there are little webs coming out of it. He also has a little yellow stinger on the end of his tail.

He has all his canon powers except it has been confirmed that his hyperspeed was just an Ultimatrix glitch.

He has all of Jetray's canon weaknesses. 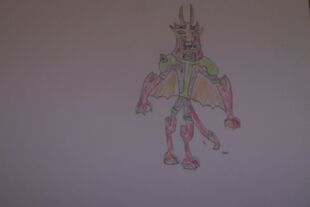 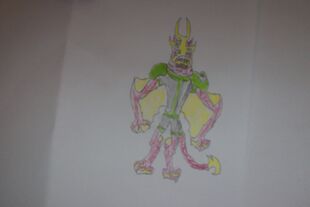 Second Version
Add an image to this gallery
Retrieved from "https://ben10fanfiction.fandom.com/wiki/Jetray_(Earth-103)/Dimension_1-2?oldid=748987"
Community content is available under CC-BY-SA unless otherwise noted.