JellyBolt is a blue jellyfish-like alien with six long tentacles that function as two pairs of arms and a pair of legs. he has the Atomnitrix symbol on his face and he has large, green eyes with prominent black outlines. He has pointed fins and has white streaks all over his body.

JellyBolt can manipulate and produce lightning and electricity, he can launch them as electrical blasts. He can also become pure electrical energy to enter electrical cables.

JellyBolt can release puddles of water from his palms that can electrocute someone with physical contact.

JellyBolt has the ability to become intangible, he is capable of combining that with his electrokinesis to electrocute objects and beings as he phases through.

JellyBolt can read certain individuals' minds by sensing the electrical pulses of his mind.

He is capable of flight.

His tentacles can extend multiple times their length.

JellyBolt's lack of bones allow him to squeeze into extremely tight spaces.

JellyBolt is capable of respiring underwater and can swimming at high speeds.

JellyBolt can use his electricity underwater, but if he is using electricity while entering water, or only part of him is in the water, he will electrocute himself. 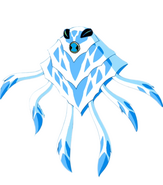