James Tompkins is a character from the series, Brandon 10.

James Tompkins takes the appearance of an ordinary human child. He wears a white lab coat that's too big for him ontop of a black T-Shirt and cargo pants. He also has brown, messy hair and brown eyes.

James is a excitable and hopeful person. He tries to see the good in things. When confronted when a seemingly hostile force, he tries to talk his way out of it. James also likes science fiction and things to do with aliens. James likes to consider himself to be Brandon's biggest fan and would take it personal if someone else were to think they were.

James has a high intellect which allows him to create useful machines and devices as well. He also is good with hacking abilities as he can pick up transmissions and signals including ones sent from government facilities. James is also very resourceful as he uses most things from his pockets such as chalk or batteries into tools or weapons as seen in Across the Planes when he constructs a battery explosive. James comes up plenty of ideas and is also a quick learner as he managed to theorize on the dimensional rift without actually seeing it before.

Due to him being Human, he does not have any special abilities which makes him affected to practically anything. He is also a child and might not get the same permissions as someone older. He also not as strong as an older Human being. Being an unexperienced kid, James also gets scared in battle or scared to go into one.

James has been interested in alien activity and noticed that most activity was in Bellwood. He decided to investigate and discovered patterns that normally no one would notice which helped him with putting together clues for solving the mystery behind the alien appearances. He then figured out that Brandon Tennyson was the source of the alien heroes in Bellwood and uploaded it to a website with various security codes. Unfortunately, James' website was hacked and the secret was uploaded to the Internet where news broke out and Brandon's secret was known. Since then, James had locked himself within his laboratory until he got an unexpected visit from Brandon 10, himself. After explaining the situation and being forgiven by the team, James helped them by showing them a hacked G.E.I.T. transmission about an alien attack. After a while, James had helped Brandon with adjusting the Ultimatrix after it absorbed DNA X's DNA. 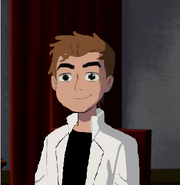 James in A Hero is Known

James in James Saves the Day

James in Ultimate Conquest
Add an image to this gallery
Retrieved from "https://ben10fanfiction.fandom.com/wiki/James_Tompkins?oldid=800591"
Community content is available under CC-BY-SA unless otherwise noted.