Jack-O-Flame is the Ultimatrix MK10's DNA sample of a Zapallazonian[2] from an unknown planet that is also found on Anur Transyl.

Jack-O-Flame has a slim green body, which is the same shade of green as Swampfire before puberty, with brown roots on him. His claws, legs and collars are also made of brown roots. Jack-O-Flame has a Jack-O-Lantern-like head which can absorb fire, making his eyes burn.

The Ultimatrix MK10 is on his stomach.

Jack-O-Flame's skin is now a bright green, like Matured Swampfire. The Ultimatrix MK10 now is on his chest and his pumpkin head skin is a little darker.

PyroSquash has a orange pumpkin head with a bluish tint to it. His skin is now blue with dark blue roots around him. The brown claws and legs are now replaced by dark blue claws and legs. The Hero Watch is on his stomach. 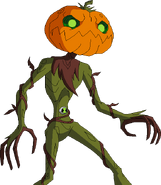 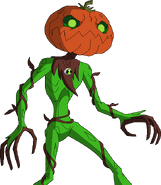 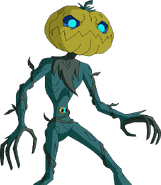 Jack-O-Flame's main ability is his ability to control fire. If fire goes in his mouth, his head ignites, gaining burning eyes. He can shoot fire from his hands or if he has absorbed fire from his mouth, breath fire. What is interesting about Jack-O-Flame's fire is that, unlike Swampfire and Heatblast, is green instead.

Being a creature of magic, Jack-O-Flame weak against magical attacks. Jack-O-Flame also cannot regenerate lost limbs if he is constantly being torn apart.