Invisilizard is the Omnitrix's DNA sample of a Merlinisapien from the planet Rin-Daal set to appear in Bryce Bowman: Devil's Bounty.

Invisilizard has a slim body that resembles a large purple salamander with darker purple camo-esque spots all over his body and a short tail.

He has three triangular eyes; the left being blue, the right pink and the middle green, though the pink and blue eyes are the only ones that blink, while the green eye does not.

He has a darker patch of skin that covers the top half of his face and runs down his back, all the way to the end of his tail.

He has a small, spike-like fin on the top of his head.

He has four-fingered hands and three toes on his frog-like feet.

He also has a wide mouth with sharp teeth.

The Omnitrix is on his chest.

Blue and purple splotches appear on Bryce's arm as all of his skin turns pale purple. Bryce closes his eyes while a slit slices up through his forehead. His eyes open at the same time as the slit, revealing a third eye. He leaps up, then lands in a sly pose.

Invisilizard's main ability is his camouflage, as he is capable of blending in with the color of his surroundings with such effectiveness that he appears invisible.

Invisilizard is very agile, quick, flexible, and can climb walls and crawl on the ground with ease. He also has sharp teeth and claws.

Invisilizard's body is highly slippery and smooth, making him very difficult to grab.

Invisilizard has a long, retractable black barb that can come out of the tip of his tail.

Invisilizard has enhanced strength, enough to push a car and a huge truck several yards away and defeat a Vulpimancer in battle. He is also durable enough to withstand being thrown against a car.

His differently colored eyes allow him to see other Merlinisapiens when they are invisible.

Although Invisilizard appears to turn invisible when he camouflages himself, he actually just changes his color. Consequently, his shadow can still be seen and any place filled with too many bright lights can be a disadvantage.

Invisilizard's camouflage can also be rendered useless if he is either carrying something or coated in another material such as powder or oil.

Invisilizard can easily be tracked by Vulpimancers using their enhanced senses. He can also be tracked by Anodites through his mana. 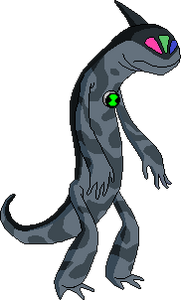 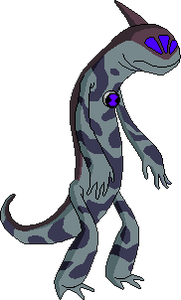