Intersect is the Negativitrix's DNA sample of a Hyperphysical Sapioid believed to originate from Object XX27-55 in Earth-1010.

Intersect is a tall, lanky humanoid with ashy skin and long limbs. He has three fingers on each hand and he stands on two long toes on each foot, with a third superfluous toe hanging from the ankle. His face is a bizarre swirl with four eyes, each rotated 90* from the others. He is 8 feet tall.

Intersect is not a being bound to our three spacial dimensions. He is a creature of four dimensions. That is not to say that he moves through time, as the dimensions he moves through are still bound by the laws of cause-and-effect and standard spacetime. To this end we only ever see a three-dimensional cross-section of his true form, and he is able to move this cross-section through our 3D space in ways that would seem otherwise physically impossible. He can use this ability to avoid taking hits or even to phase through physical boundaries. His ability to phase through objects is not effected by whether they are tangible, super-tangible, or neither as he is effectively moving around them. He possesses what, to us, appears to be minor shapeshifting abilities to help facilitate his ability to fold himself in part or in whole out of our physical space.

He can pick up objects and move them through the higher dimension as well, however they will not be able to use the objects, record anything with them, or have them interact with anything while outside of their natural three dimensions. In addition, any person lifted through the fourth dimension will effectively blackout so long as their head is outside of our three dimensions. Any 3D object dropped or left in the fourth dimension will naturally 'bleed' back into 3D space. Intersect cannot damage objects by half-pulling them through a 4D slip in our 3D space then dropping them or attempting to 'close' the slip. Intersect has no control over 4D space itself, and the object will simply be pushed back into 3D space like a foam floatboard being pushed underwater in a swimming pool.

He can react quickly to any incoming threat, though his typical response is to immediately flee into the higher dimension.

Intersect is deceptively strong for his stature, and has very sharp claws.

Intersect is not a physically resilient alien and can be easily put out of commission.

Intersect can easily be forced to flee due to its natural 'flight' response to a threat. This weakness is usually triggered by catching him off-guard or on the back foot, but can be overcome if the user is consciously aware that the fight is going to occur beforehand.

Intersect is one of the eight aliens available in Albedo's Negativitrix as it was created.

He was used twice in Time Trials. The first time was to bring Sadie away from Ben, so that he could speak to alone her in the Stardust. Intersect was used again later to flee after Albedo lost his fight with Ben. 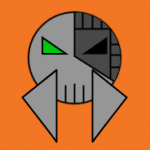